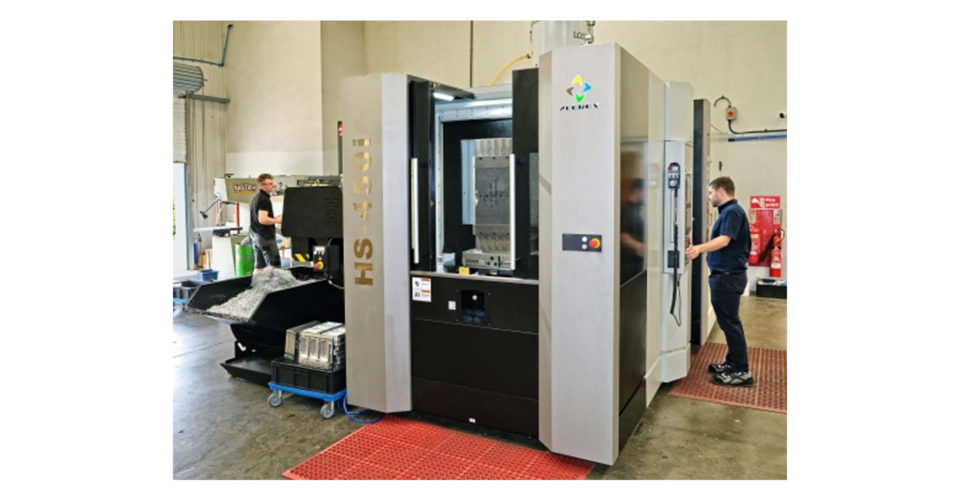 To expand its prismatic machining capacity, in July 2020 the company invested in its first ever horizontal machining centre (HMC), a 4-axis Averex HS-450i with nominal half-metre cube working volume from Whitehouse Machine Tools, Kenilworth, sole sales agent for the Taiwanese HMC manufacturer in the UK and Ireland.

What prompted the purchase of the twin-pallet, 40-taper machine was an uplift from 150 to 350 per week of a particular 6061 aluminium, two-part enclosure needed by CTPE’s largest customer, a medical sector OEM, for the production of critical care diagnostic equipment.

There is no problem completely machining the required quantity of covers three at a time in two hits on a Japanese-built Brother Speedio S1000X1 30-taper VMC installed in Mildenhall last April by Whitehouse Machine Tools. Neither is there an issue completing Op2 on the matching housing using the same machine, which has now been fitted with an angle head to make the cycle even faster.

However, Op1 on the housing was proving too time-consuming on a 3-axis VMC to meet the increased order level and was causing a permanent bottleneck, despite the running hours having been extended from 10 to 14 per day.

Alex Taylor, a director of CTPE and son of the founder, Chris, decided that an HMC would best suit the higher production volume. The second pallet allows the next parts to be fixtured while the previous parts are being machined and automatic pallet change takes just five seconds. Dual augers efficiently remove chips that have fallen from a cube fixture, so there is no manual intervention except to empty the swarf bin after every couple of pallet changes.

In contrast, the spindle on the fixed-table VMC was idle for 25 minutes after each cycle for accumulated swarf to be cleared and the next parts clamped for machining. A further problem was that recutting of chips that collected within the component risked damaging the solid carbide tools.

An HMC eliminates that difficulty and is more robustly built than a VMC so vibration is lower, meaning that cutters last longer. The most significant benefit, however, is that four aluminium billets can be fixtured on a cube for Op1, so 24 housings are machined in a cycle time of 160 minutes. Formerly on the VMC, only two billets could be fixtured for machining a total of 12 components and the program ran for 135 minutes. The figures equate to a production time saving of 40 per cent, considerably reducing manufacturing cost per part for this operation, particularly as there is now minimal operator intervention.

Three potential HMC suppliers were reviewed by Alex and Chris before they made their decision. The Averex machine was chosen as it offered high quality at an affordable price and, unusually, the possibility to retrofit a pallet pool that adds a further four pallets to the existing two, making a total of six. The tool magazine is also extendable from 80 through 120 to 220 pockets.

Alex commented, “The flexibility of being able to expand the machining cell on-site at an affordable price was very attractive to us.

“We will almost certainly opt to do it in the next couple of years and take advantage of unattended machining to lower piece part cost when producing anything from large batches through small-lot multi-part runs to ones and twos.

“The other advantage of this route to automation is that it avoids the expense of buying another machine and saves space on the shop floor.

“We favoured the build quality of this 13-tonne machine. Although assembled in Taiwan, it includes thermal control of ballscrew nuts, thrust bearings, Y-axis servo mounting and spindle cartridge.

“The machine has hand-scraped surfaces for mounting the ballscrew bearing blocks and roller bearing slideways and it incorporates top quality Japanese-made components including the BIG Plus spindle, ballscrews, heavy duty roller guideways, rotary table and the tapered cones for pallet location.”

The HS-450i is also fast. It has a 15,000 rpm / 22 kW direct-drive spindle, one-second servo-driven tool change, and 1g linear acceleration to 60 m/min cutting feed around the 640 x 610 x 680 mm working volume, all of which ensure minimal idle times. Maximum workpiece size is 750 mm diameter by one metre high and control is by a Fanuc 31i Nano CNC.

Whitehouse Machine Tools’ applications engineering department helped CTPE to configure the machine to suit the subcontractor’s requirements, including advising on the workholding and modifying and improving the Op1 part program that previously ran on the VMC. The HMC was therefore ready to enter full production within a few days of arrival.

In August 2020, the supplier was called upon again to convert the Op1 cover program from the Speedio to run on the Averex. It gives CTPE the flexibility to execute the first operation on both enclosure parts on the two HMC pallets respectively while the customer’s call-off rate temporarily decreases before rising again before winter.